Death on the Nile

Death was an important subject also for the old Egyptians. The god Osiris was an important god as he was the first one to be embalmed according to the myths. The Egyptians believed firmly in the afterlife. Osiris himself was murdered by his mean brother Set. Set killed his brother and put him in a led coffin and threw him in the river Nile. Isis, the sister and also wife of Osiris found her dead husband eventually. She cried and her grief was so deep that the Nile flooded every now and then. And still does. Osiris never got to return to the living but had to stay down there in the underworld as the king of the dead. The king of the dead was also the king of life as he was the god of fertility at the same time. All that lives will die. But in one way or another be reborn.

Zoomed in from outer space in the year 2099

Well, this is what happens if nobody does anything. The geckos have taken over. In Thailand my son Jens and I shared a house with a big gecko lizard. He talked to us at night.

Coyote in the monsters belly 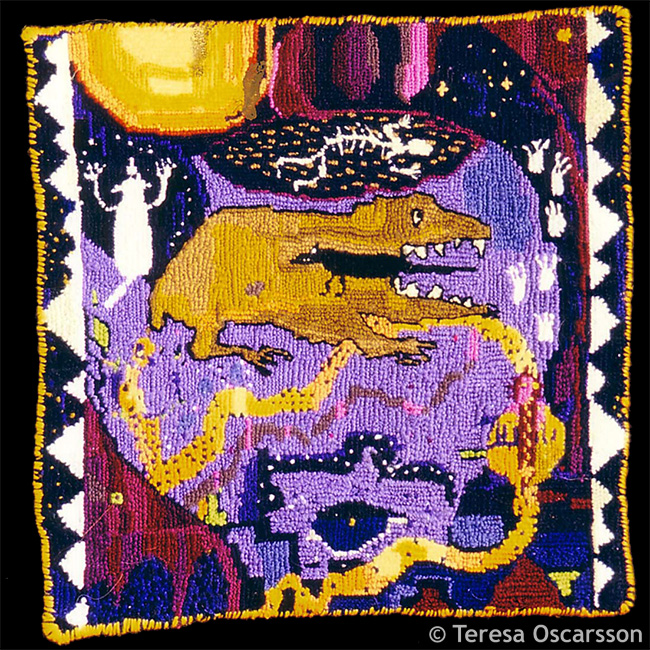 Coyote in the monsters belly, 2001

Myths take place in the world of gods and spirits. There are no clear-cut limits between men and animals. You can never be sure of what you see so therefore I like to make animal-like people or humanlike animals in my embroideries. One of the first one I ever made shows the mythological trickster Coyote. And as far as I know he still lives and thrives in stories among the Native Americans of North America. 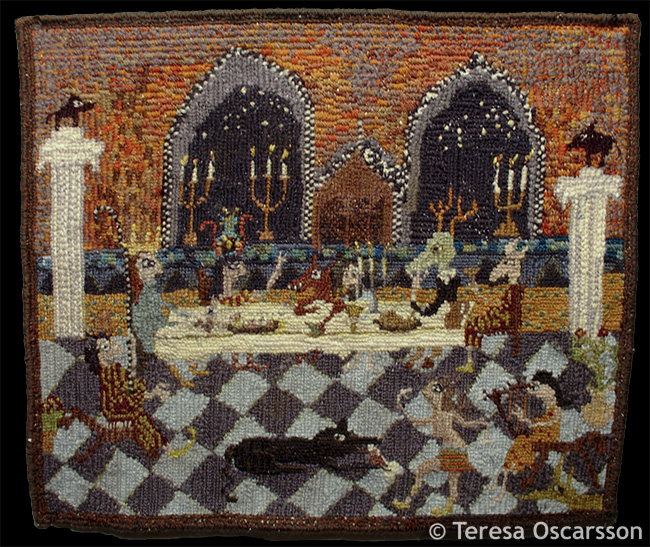 I was inspired by the famous painting depicting the last supper of Jesus. I felt I needed to study it more carefully after having read the boring book The Da Vinci code. I was thinking about Jesus and felt it was a little funny that his very first miracle was to supply a party with wine. 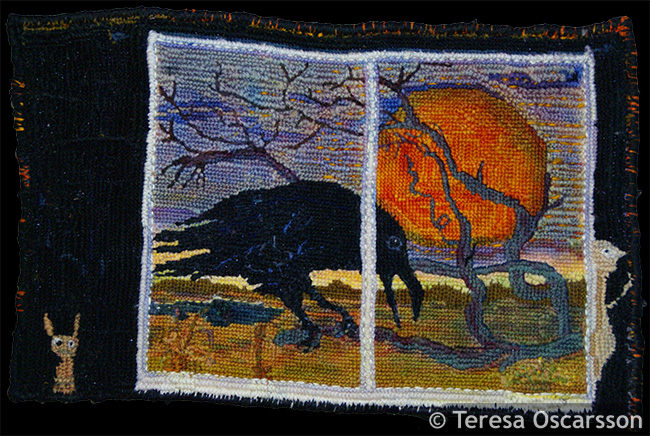 Many know the story of Noa as told in the Bible. God had made people but they were stupid and sinful and he regretted ever making them. To punish them he wanted to drown all of them. Everyone was to die but if he could find one human who wasn´t all that bad he would spare him. This man turned out to be Noa. He built an arc and moved in with two animals of all the animal species that lived on earth. After some time the water receded and Noa sent out a bird to check things out.

Most people who have read the Old testament now sees the image of a white dove with a green plant its beak. The proof that the world was livable again. But, the first bird that Noa sent out was another bird. The black raven was sent out first. He flew all over the newborn world and saw many strange and wonderful things. But he didn´t bother to return. A bit willful, don´t you think? The better behaved white dove got ravens job instead.  He returned to Noa and gave him the good news.   In the bible you can read that the first thing that happened to Noa was being caught lying naked in his tent very, very drunk. Shameful.

Where did the raven go? My guess is north because we find him in many stories and myths here. Many Native American stories tell us how the raven travelled around the world in mythical times. He is described as a creative force, a culture hero but also as a trickster, an unreliable character with conflicting traits. The raven (as well as his mythological cousin Coyote) mirrors the weaknesses of man. Greed, envy, jealousy, lust and moral chaos.  But he is not an evil being. The reason things go bad is caused by his thrill seeking and impulsiveness. In spite of all his immoral behavior he is often the hero in Native American myths. He kills monsters, frees prisoners and wakes the dead.  His greatest gift to man was the bringing of light (the sun) and the fire.

In Scandinavia too the ravens were considered fine beings. Oden had a much better relation to them than Noa had. The raven didn´t care for Noa but to Oden both Hugin (Mind) and Munin (memory) returned every night to give their reports about the lay of the land.  Oden is called the one who sees all and for that he could thank his ravens.

Other birds seems to just eat the same old food and sing the same old songs depending on how hungry, scared or lonely they feel. But the raven can talk with different intonation and sounds and if he is up for it he can fly upside down. He is not fuzzy about his food; road kill is just as fine as garbage or blueberries. He doesn´t seem to care much about where in the world he lives. Ravens are found in deserts, in the arctic, in forests and by the sea. In contrast to other more boring birds the ravens seems to enjoy themselves and are often seen playing funny games, very often by annoying other animals. They are bold enough to grab a feather from an eagle or pulling the tail of a wolf. If you get lucky you might see a raven crash dive with closed wings or make perfect somersaults and other skilled tricks. Their varied language strengthens their parent´s unity that can last all their lives. The raven gives his partner small presents, small pieces of nice moss or especially pretty stones. It even looks like they kiss each other sometimes. When mating you can hear a specific bubbling sound, it may sound just like when you open a bottle of champagne.  They have so many different sounds. When a male raven calls his female he makes a sound that only she can recognize and respond to. She has a name, thus.

In myths of raven he is often seen shifting his form, he can transform himself to just anything. Also in reality they are masters of changing their appearance. They can, if they want to, raise their head feathers so they appear to have their feathers parted in the middle.

A scientist once made the experiment of hanging a piece of meat from a long string. To reach the meat the raven had to bring up the string bit by bit and at the same time keep the loose string with one foot every time he took a new grip. To make this work you have to be extremely smart. Many ravens succeed surprisingly well. The raven specialists (oh, what a wonderful job) say it is the playfulness that is the key to their intelligence.

These raven specialists who made the meat and string-experiment worked in Yellowstone National Park. I´ve been there three times and there are really lots of wonderful things to see. Wolves for example. The raven is not a hunter himself; he has a buddy doing it for him. That buddy is the wolf. The people in Yellowstone wanted to know why these two species were so good friends. The answer was that the ravens gets food and safety and in return the he tell the wolfs where their prey is. The scientists could even see that certain raven individuals were particularly good friends with specific wolf individuals. No wonder wolves are so great hunters when they have eyes in the sky.

Also in myths the reality is confirmed. Oden had his two ravens but he also had two other companions. They were Gere and Freke. Wolves.